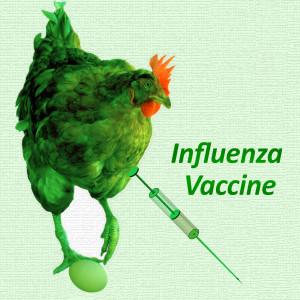 The published efficacy of the 2014-2015 influenza virus vaccine was a paltry 23% match against prevailing strains. At this low efficacy rate, the costs of flu prevention do not cover the costs of vaccination (we know this from inputting the vaccine cost, direct medical costs and efficacy into our Influenza Vaccine Cost-offset Model). To break even, the flu vaccine should have an efficacy rate of at least 36%.

Based on global influenza disease progression models and the 6-months lag-time needed for production, I am predicting another poor match for 2015-16.

Influenza vaccine manufacturers use a 70-year old technology to create egg-based flu vaccines. It takes 6 months to produce.  There is ONE FDA-approved cell-based flu vaccine that still uses eggs for production and takes slightly less development time. The 3rd available technology to develop flu vaccine is “Recombinant” and has been approved in the US since 2013. It is the only 100% egg-free vaccine approved (allowing for the shortest production time).  I am not sure why recombinant influenza vaccine technology is not heavily preferred.

Each year, the WHO determines which of the Type A and Type B strains of influenza are infecting people. Typically, the CDC affirms these influenza vaccine strain decisions by mid-February. Influenza manufacturers are then given the go-ahead to create the vaccines by the beginning of March. Most vaccines are “trivalent” meaning they contain the two “A” strains and predominant “B” strain provided by the CDC. A “quadrivalent” vaccine contains the same 3 strains plus an additional “B” strain.

Typically, the “A” strains are the problem, because they tend to mutate faster – as was the case in 2014-2015 with the A H3N2 strain. It began mutating in March, 2014 – AFTER production had begun. The FDA’s US Vaccines and Related Biological Products Advisory Committee (VRBPAC)  should consider waiting 2 more months, and make recommendations at the end of April – when we have a better idea of the circulating virus strains. Recombinant technology could allow for this delay.

There are 9 different FDA approved manufacturers of the influenza virus vaccine. One aspect of the Affordable Care Act is that health insurers must pay for a patient to receive the vaccine. Unfortunately, this has led to a price war – with no differentiation on price points. The cheapest trivalent usually wins.

This game the CDC plays (deciding which 3-4 flu strains will be bad guys) is akin to making a preseason bet on only 3 possible NFL teams to win the Super Bowl – before the season has started. I would rather make this bet half-way through the season. A lot can change in 2 months!

The WHO publishes excellent resources to learn the prevailing strains. The Global circulation of influenza viruses graph below shows that the H3N2 Type A strain that caused so much misery last flu season, had not gained momentum until AFTER week 8 (when the WHO makes the decisions on which strains to include in the flu vaccine). The following graphs may be accessed at
http://www.who.int/influenza/gisrs_laboratory/updates/summaryreport/ 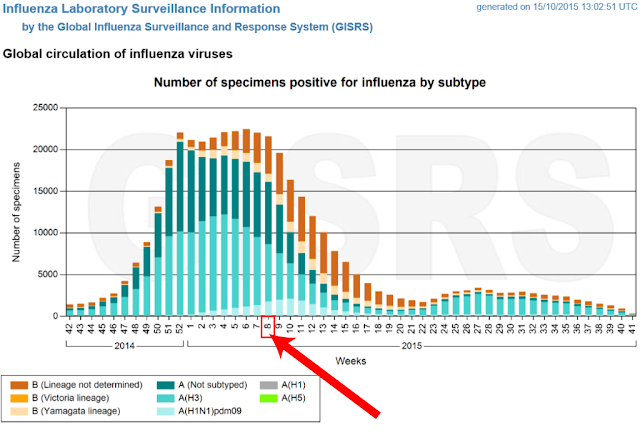 The flu follows predictable geographic patterns. In Temperate South America, it peaks October-November, as opposed to the global peak of January-February (as seen below). 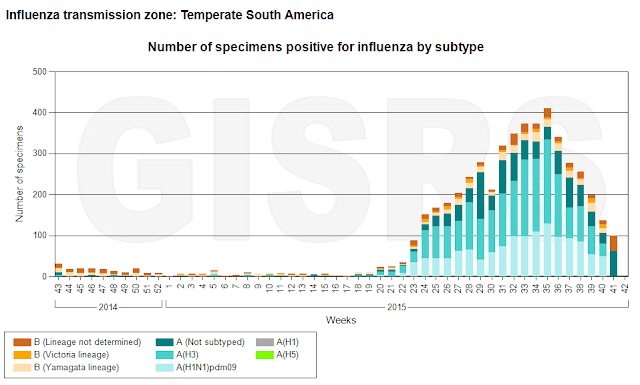 In North America, influenza peaks about 6 weeks later than South America. For both continents, the WHO’ vaccine decisions that are made back in February give the strains ample time to mutate and change the course of the prevailing strain(s). Six months can be a fairly long time, given the virulent nature of viruses. 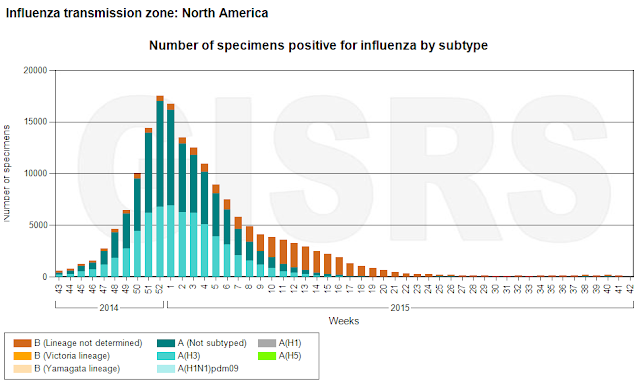 Historically, most virulent strains of influenza are derived from China and surrounding areas. The South-East Asia graph demonstrates the year-round influenza activity in South-East Asia, which helps define the problem of guessing which strain will predominate in the following season. 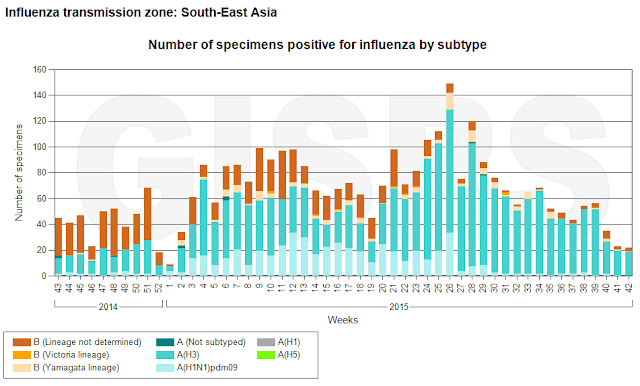