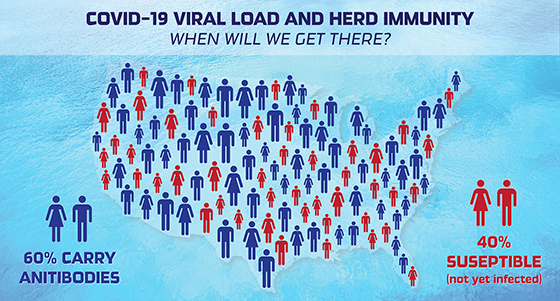 Why VIRAL LOAD and a majority of the population having antibodies (HERD IMMUNITY) is important:


Viral Load is a measure of virus particles typically expelled through a cough, sneeze, laugh or even talking.  It’s the amount of virus present once an infected person has had the virus long enough for the particles to replicate in their cells. The number of particles a person is exposed to is a major determinant of how likely they are to become infected and how severe the symptoms become (this is called “the infectious dose”).
Herd Immunity is the aggregate percentage of people who already have the disease antibodies in their system and thus protect those in their herd (midst) who have not been infected. Like it or not, it appears that the United States’ goal is now to reach herd immunity:

Serological Testing (Antibodies) Background: COVID-19 antibody testing has shown that many more people have been infected than have tested positive with a COVID-19 test.

As COVID-19 has already reached nearly all nooks and crannies of our country, containment may not be much of an option anymore. The strategy has moved to mitigation. If and when we get the virus, we need to try to minimize its severity. The best ways are to socially distance, wear a mask, stay home if not feeling well and not congregate. Demand that people in your household do likewise.  Also, keep an eye on your area’s antibody testing rate. With the opening of the country, there will continue to be new positive COVID-19 tests, but we will likely continue to have far more passive cases that are less severe (and not tested). We predict that most states will reach herd immunity status before a COVID-19 vaccine is available

Some experts have shown that the infection’s viral load affects the severity of disease. It makes sense. As far back as the 1918-1919 Spanish Flu, simulation models have shown:

A higher viral load has indeed been associated with worse severity for most viruses. A Hong Kong COVID-19 study published in the Lancet showed the following regarding COVID-19 viral load:

In an April 29, 2020 study from China, patients in the study had acute antibody responses to SARS-CoV-2 (COVID-19). Previous studies on SARS and MERS coronaviruses showed that virus-specific antibodies were detectable in 80-100% of patients at 2 weeks after symptom onset.  Experts theorize that the higher number of viruses that start the infection, the MORE cells that are infected at the start of the disease process and then continue multiplying.

There is a standard international viral load test which generates a number between 0 and 40. The lower the number, the higher the level of virus. The result is called the “Ct value” or “threshold cycle”. However, just because a person has a lower viral load does NOT mean that he or she will have a lesser risk of developing COVID-19 or less severe symptoms. A person’s ability to fend off disease (strength of their immune system) may or may not overwhelm a person’s low viral load.

For whatever reason, some people are reluctant to wear masks or coverings. We now know that COVID-19 first manifests within the nose and throat (higher viral levels are initially in the nose). A person with COVID-19 can send airborne virus particles up to 6 feet or more via sneezing, coughing, breathing, laughing or singing. The American Society of Transplant Surgeons has posted PPE statistics for preventing COVID-10:


The Japanese have worn masks since the 1950’s as a safeguard against breathing air pollution. The Mayo Clinic has stated that face masks can prevent the spread of COVID-19 when combined with other preventive measures such as frequent hand washing and social distancing. In a perfect world, there would be sufficient N95 masks for the general public, as they can filter out both large and small particles. Surgical masks are loose-fitting, disposable masks that protect the wearer’s nose and mouth from contact with droplets, sprays or splashes. Since so many people don’t KNOW if they are COVID-19 carriers, the idea is to prevent spreading it to others. Research shows that COVID-19 can be spread via invisible droplets as small as 5 microns and by microscopic bioaerosol particles, as well as by visible droplets. Various masks will have different filtering capacities.

Can masks, hand sanitizing and social distancing lower the COVID-19 reproductive rate?  In Minnesota, the answer is yes. In a Star Tribune article published on May 13, 2020, expert scientist Youyang Gu demonstrated that Minnesota’s reproductive rate is 0.97 - just under the 1.0 level by which would yield outbreak. Note that in an earlier Fitzpatrick Translational Science blog, we identified the reproductive rate from Wuhan, China to be 2.2.  The key is to keep the basic COVID-19 reproduction number (R0) to less than 1.0. In a soon-to-be published article, the authors suggest that very small viral particles (<5 microns) are not responsible for much COVID-19 transmission. With the wearing of a mask, micro-droplets only travel 1.5 meters from the person with a mask vs. 5 meters from one not wearing one.

Outdoor vs. Indoor. A recent study from Japan demonstrates that the odds of transmitting COVID-19 in a closed (indoor) environment was nearly 19x higher than in an open-air environment.

So, you are not going to wear a mask? Four recent studies have shown that nearly half of patients infected with COVID-19 were transmitted from people who themselves did not have symptoms. The CDC now identifies being in close contact with an infected person who then sneezes, coughs or talks as the major risk for spreading the virus.

It’s interesting to note which places/events are deemed to be high-risk, according to Dartmouth Immunologist Erin Bromage. Public bathrooms should be avoided or used with caution, but so should indoor places that are densely packed with people. Simply talking or singing at a private gathering, like a birthday party, can still spread hundreds of particles every minute. Events like these should be avoided, or at least taken outside. Bromage also suggests limiting one’s time at places with higher exposure.

In summary, “be like Sweden”. Use common sense, isolate “at-risk” patients, practice responsible social distancing, enact laws that are not draconian, open schools and strive for herd immunity. Managing the pandemic and not trying to defeat it should be the goal.